What is the shear wall?

In structural engineering, a shear wall is a vertical element of a seismic force-resisting system that is designed to resist in-plane lateral forces, typically wind and seismic loads. In many jurisdictions, the International Building Code and International Residential Code govern the design of shear walls. A shear wall resists loads parallel to the plane of the wall. Collectors, also known as drag members, transfer the diaphragm shear to shear walls and other vertical elements of the seismic force-resisting system. Shear walls are typically constructed from materials such as concrete or masonry.

Shear forces can also be resisted by steel braced frames which can be very effective at resolving lateral forces but may be more expensive. When a structural member experiences failure by shear, two parts of it are pushed in different directions, for example, when a piece of paper is cut by scissors. Shear walls are particularly important in large, or high-rise buildings, or buildings in areas of high wind and seismic activity. Shear walls can be positioned at the perimeter of buildings or they may form a shear core – a structure of shear walls in the center of a building, typically encasing a lift shaft or stairwell. Lateral pressures tend to create a rotational force on the shear wall which, due to the shear wall acting as one member, produces a compression force at one corner and a tension force at another. When the lateral force is applied from the opposite direction, this ‘couple’ is reversed, meaning that both sides of the shear wall need to be capable of resolving both types of forces.

2-Providing Lateral Stiffness to the building: Shear Walls provide large stiffness to building in the direction of their orientation, which reduces lateral sway of the building and thus reduces damage to the structure. 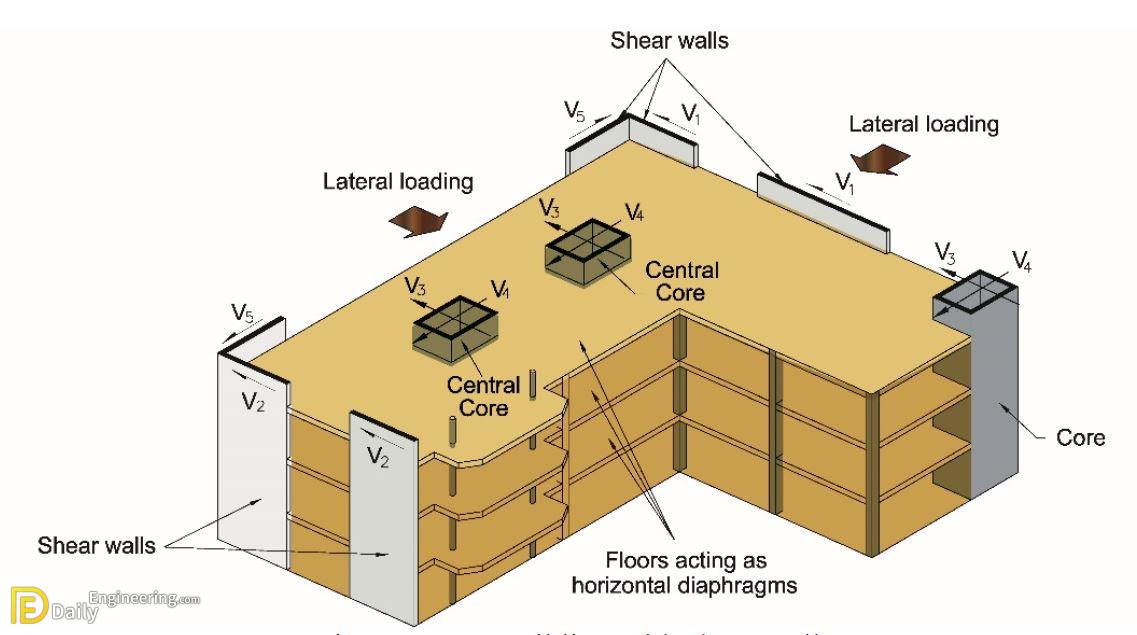 What are Columns and functions?

The column is a vertical member in a building whose primary function is to support the structural load and transfer it through beams. Upper columns transfer the load to the lower columns and finally to the ground through footings. 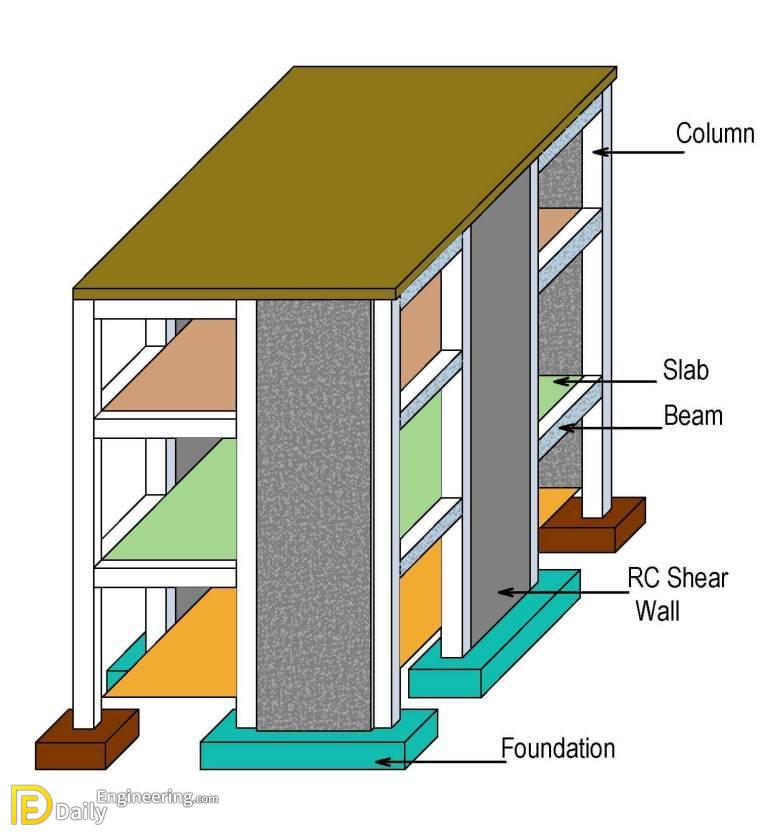 Difference between them Visually

Just by visual inspection, you could say that columns are a bit less wide than shear walls; and you could already answer the reason that why the shear wall is absent in low-rise structures as compared to the must-to-have presence in high-rise sky-scrappers and buildings.

Difference between them in purpose

The reason to provide a shear wall is to strengthen the building against seismic forces due to the fact that shear wall resists lateral load by initiating the shear deformation, hence named shear wall; instead of flexural and buckling deformation in case of columns, which is very dangerous and the primary reason for column failure in buildings.

The difference from a Strength point of view

Now let’s examine the strength characteristics of both the members; Columns in a building are provided to transfer the imposed loads either through-beam or without beam into the foundation directly underneath. Columns transfer these loads by using the crushing or compressive strength of the concrete. However, the column is very weak in the case of lateral load, buckling load, or shear load. Shear wall, on the other hand, is designed to resist lateral load by shear strength or shear action.

Click Here To See What Is A Difference Between A Tie Beam And A Plinth Beam?
Previous Post

Why Bars Are Bent In Slabs Near At Support?

How To Calculate Quantity Of Steel For RCC Beam,Column And Slab