What Is Punching Shear Failure And How To Prevent

Punching shear is a type of failure of reinforced concrete slabs subjected to high localized forces. In flat slab structures, this occurs at column support points. The failure is due to shear. This type of failure is critical because no visible signs are shown prior to failure.

The Punching shear in reinforced concrete slabs can be considered as a 2D analog of the shear observed in beams. This kind of failure occurs as a sudden rupture. This rupture cannot be restrained with the help of the main reinforcement. Hence, there is a reduction of the ultimate load capacity of the structure below the flexural capacity by the action of shear. But when compared to beam shear, the punching shear is less critical. In slabs, the punching shear occurs when they are subjected to high values of concentrated loads. These load categories include the wheel loads on the bridge slabs or the loads from above floors on the columns that support the slab floors.

Conventional wisdom does not apply when considering the mechanism of punching shear failure; in a slab system with a concentrated load or at a slab column connection, the loaded area is not actually pushed through the slab as shown in Fig. Punching shear failures arise from the formation of diagonal tension cracks around the loaded area, which result in a conical failure surface as illustrated in Fig.

Punching shear is a phenomenon in flat slabs caused by concentrated support reactions inducing a cone-shaped perforation starting from the top surface of the slab. Although generally preceded by flexural failure, punching shear is a brittle failure mode and the risk of progressive collapse requires a higher safety class in structural design.

The design to prevent punching shear failure proceeds as: 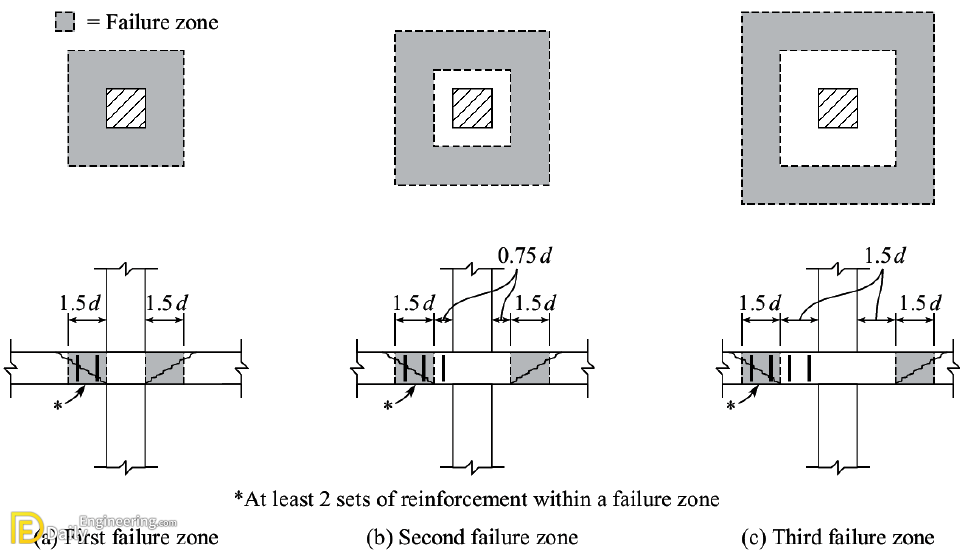 Changing the form of structure includes deepening the slab, making the column larger, introducing drop panels or flared column heads. There is also the possibility to adapt foreign codes of practice that are more liberal! The reinforcement put in is usually vertical and traverses the potential failure line. Of course, we don’t know where the failure plane might be, so we must reinforce each possible failure plane.

Click Here To See Difference Between Shear Wall And Column