The Golden Bridge (Vietnamese: Cầu Vàng) is a 150-meter-long (490 ft) pedestrian bridge in the Bà Nà Hills resort, near Da Nang, Vietnam. It is designed to connect the cable car station with the gardens (avoiding a steep incline) and to provide a scenic overlook and tourist attraction. The bridge loops nearly back around to itself, and has two giant stone hands designed to appear to support the structure. 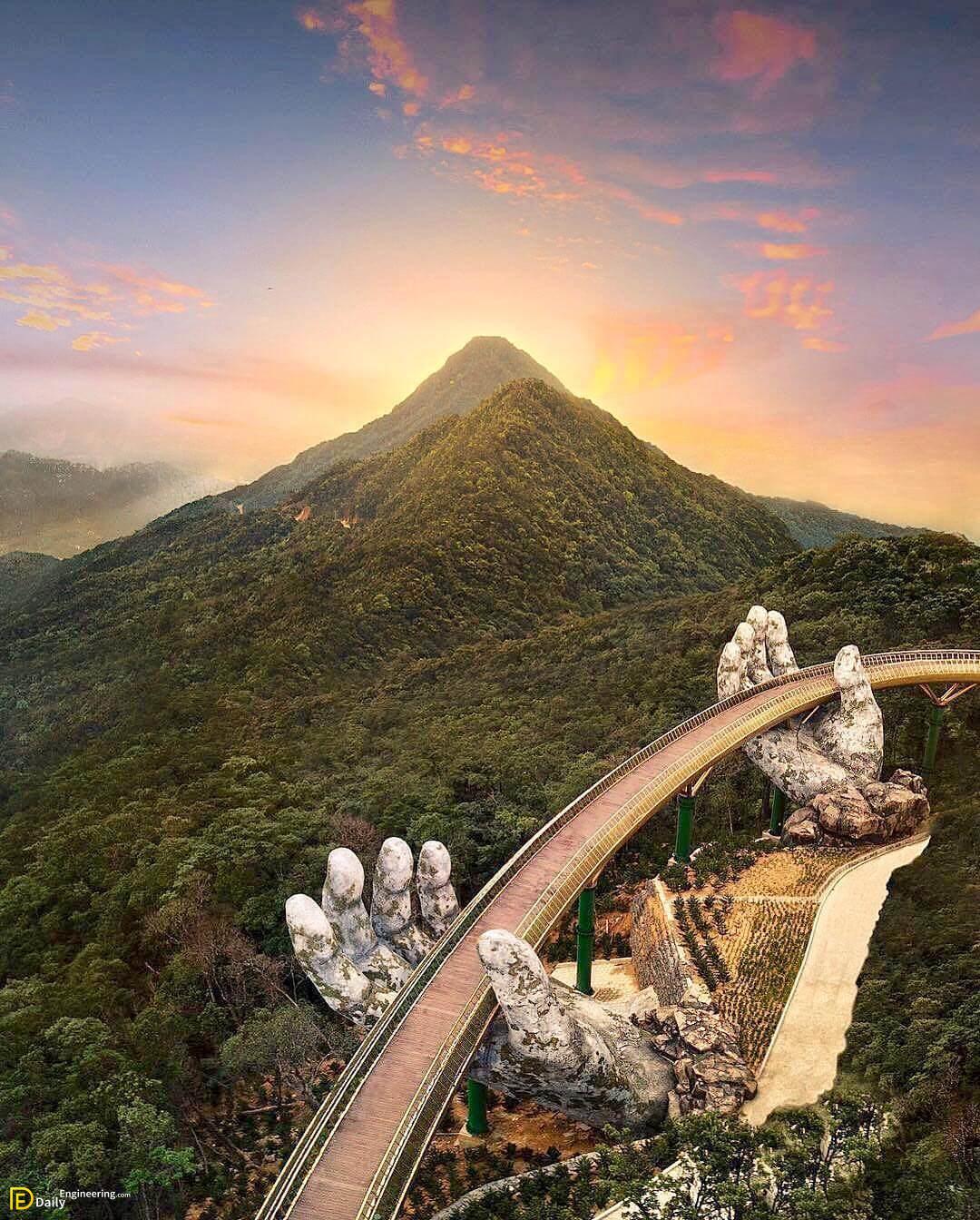 It sits approximately 1,400 meters above sea level which offers an incredible view to those on the bridge. The client for the project was the Sun Group. The bridge was designed by TA Landscape Architecture based in Ho Chi Minh City. The company’s founder, Vu Viet Anh, was the principal designer. The bridge opened in June 2018.

The designers, TA Corporation, provide the following details about the bridge’s concept, shape, and material:-

Ba Na Hills Resort Da Nang has long been known as one of the most famous tourist attractions in Vietnam as the stunning property is set among some of the most charming scenery of nature. The Golden Bridge is located on an impressive cliff in the resort. Its construction is part of the continuing expansion project of the Avatar Garden. 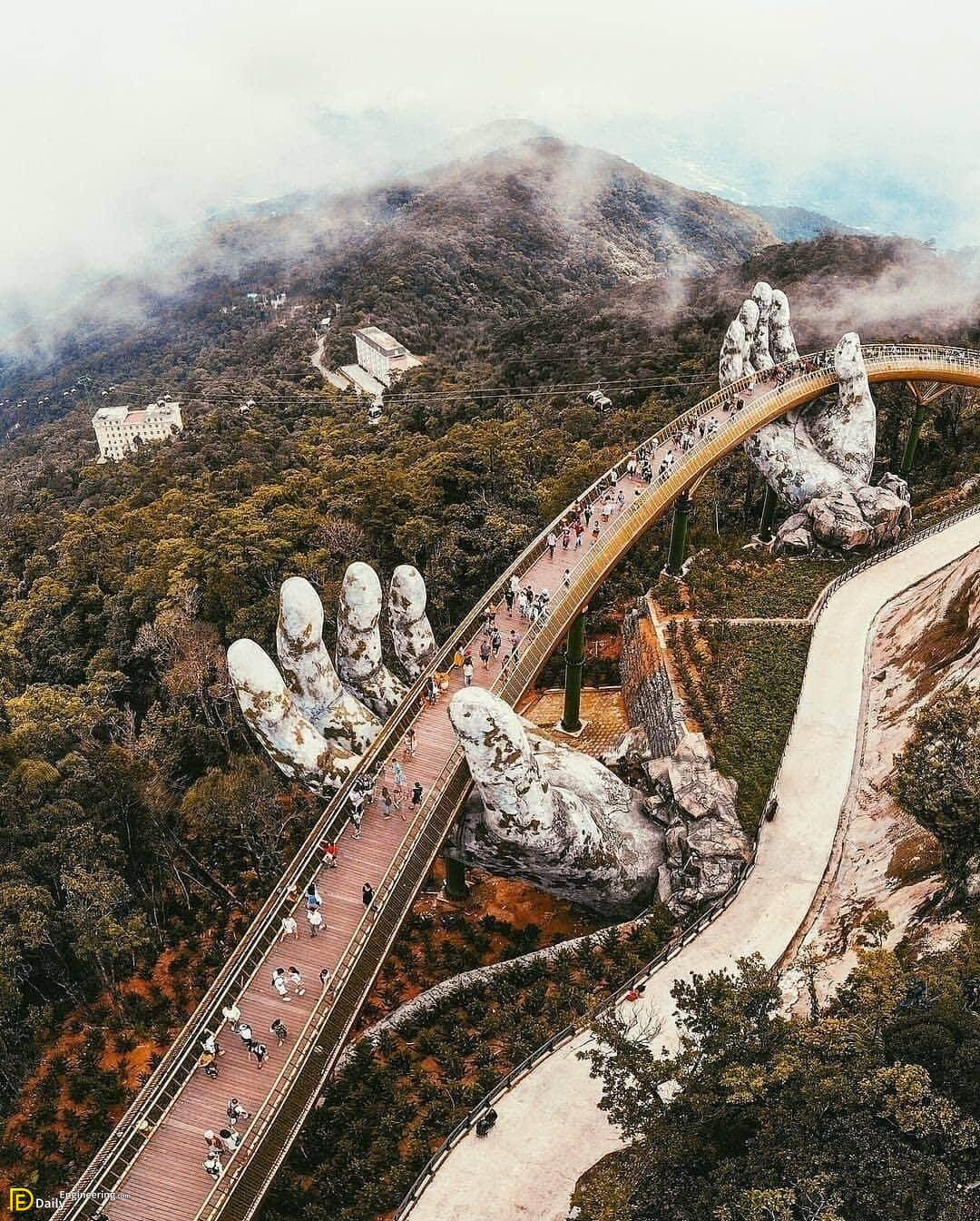 The Golden Bridge is an important part of the newly upgraded route from the cable car station to the gardens. Before the construction, moving between the two destinations demanded to shift due to a considerable height difference between the two spots. Accordingly, a demand for a connector for better circulation is essential. 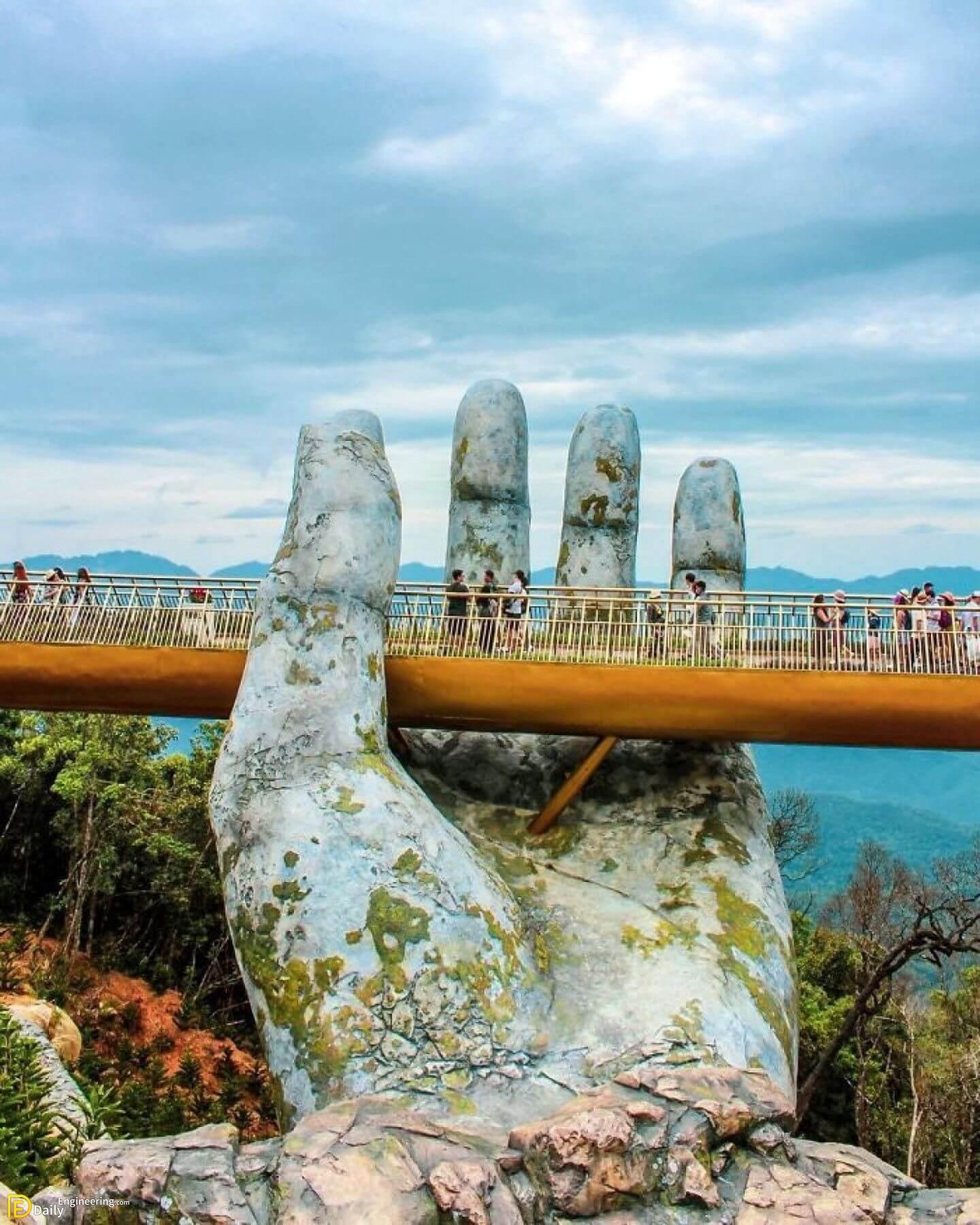 The concept of the bridge was not only arising from its shape but from its story as well. As an expanded part of the Avatar Garden, the bridge exhibits its existing theme that focuses on the myth of Gods, humans,s, and nature. For the general concept of a being superior to humans, “gods” are usually illustrated as supernatural large-scale human-like beings. For that reason, extensive body parts, a huge pair of hands, in this case, were handled in such design since unusual elements commonly spark visitors’ attention and curiosity and astonishing them. The remarkable appearance of two huge grips looks like they drew the bridge out from the ground and adore it as it were a gift from nature. In addition, local mountainous foggy and hazy weather helps promote the design aesthetics as well. 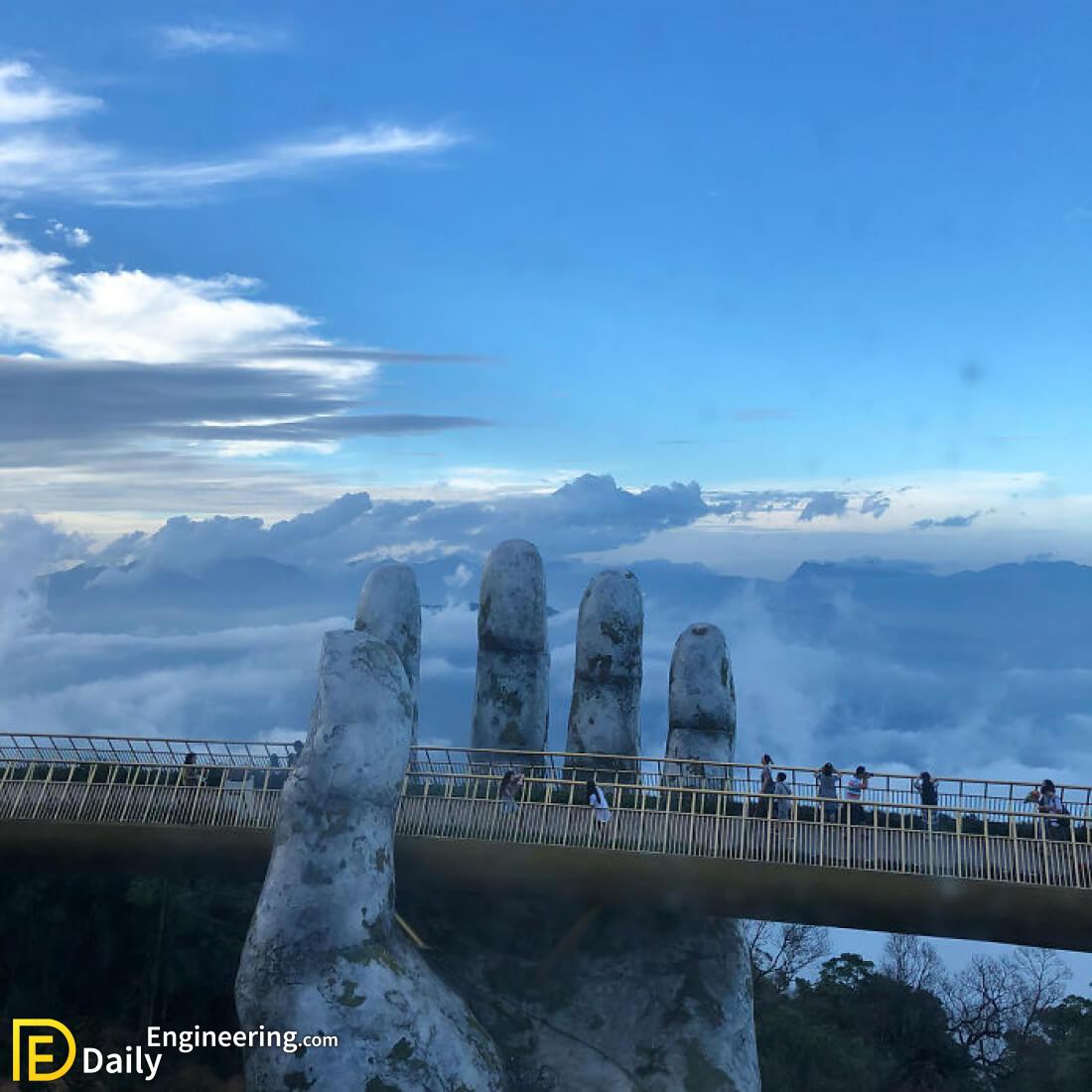 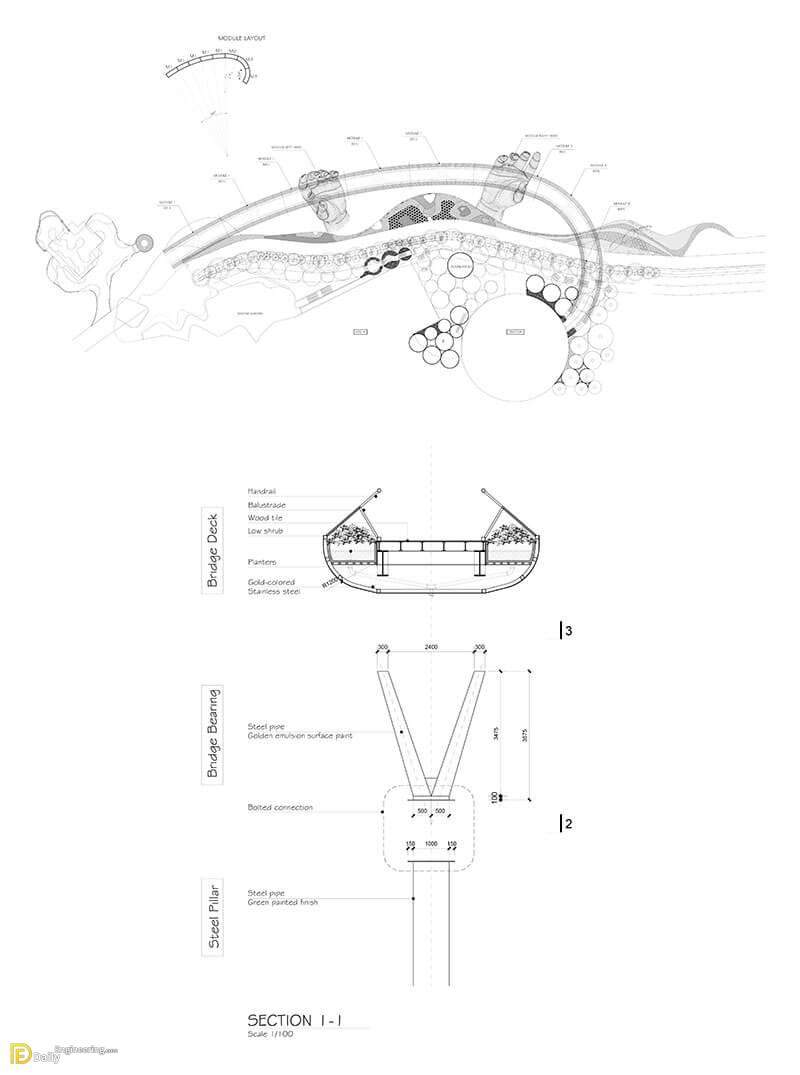 The Golden Bridge is patterned as precious gold bullion which is dragged out and treasured by a giant pair of hands between heaven and earth. The initial solution proposed by TALA was to build an elevated walkway between the two destinations; however, following a great issue of the land slope, TALA chose to pursue a distinctive track. Subsequently, the new design of the arched bridge is in harmony with its surroundings so that both artificial and natural elements could be integrated into the planning. The outcome is a spectacular 150-meter-long pedestrian bridge that looks like it is stretched out mid-air under the strain of colossal hands.

The key to the design development was how the structure was to be inserted into a sensitive site, without major damage and disruption to the cliff below. Despite the structural complexity, extensive use of parametric software and the team’s understanding of fabrication techniques enabled the application of branching columns that help reduce the number of columns and enhance the project outlook. Columns used for the Golden Bridge had their frame painted in appropriate shades to blend in with the forest and give off the impression of a hovering structure. The two hands are supported by skeleton frames following anatomical structure, swathed in wire and fiberglass mesh, then covered and decorated with theming techniques.  Additionally, the position of each finger has been reconsidered and remodeled several times to attain the best shape. 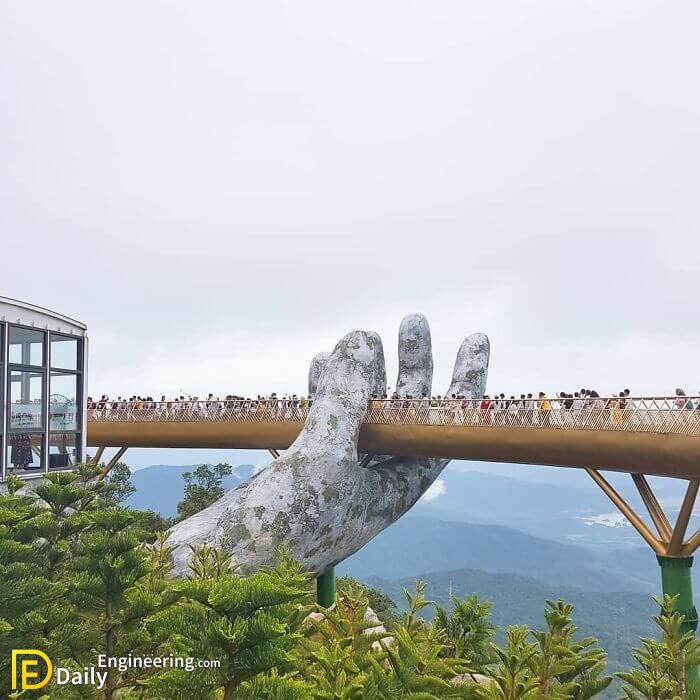 The 5-meter-wide bridge signals to the future of the area, with a design that adds value to its surrounding, fostering the existing scenery on the mountainside. The bridge generates a destination for walkers and an exceptional observation deck where visitors can feast their eyes on Da Nang city and Truong Son Mountains on sunny days. 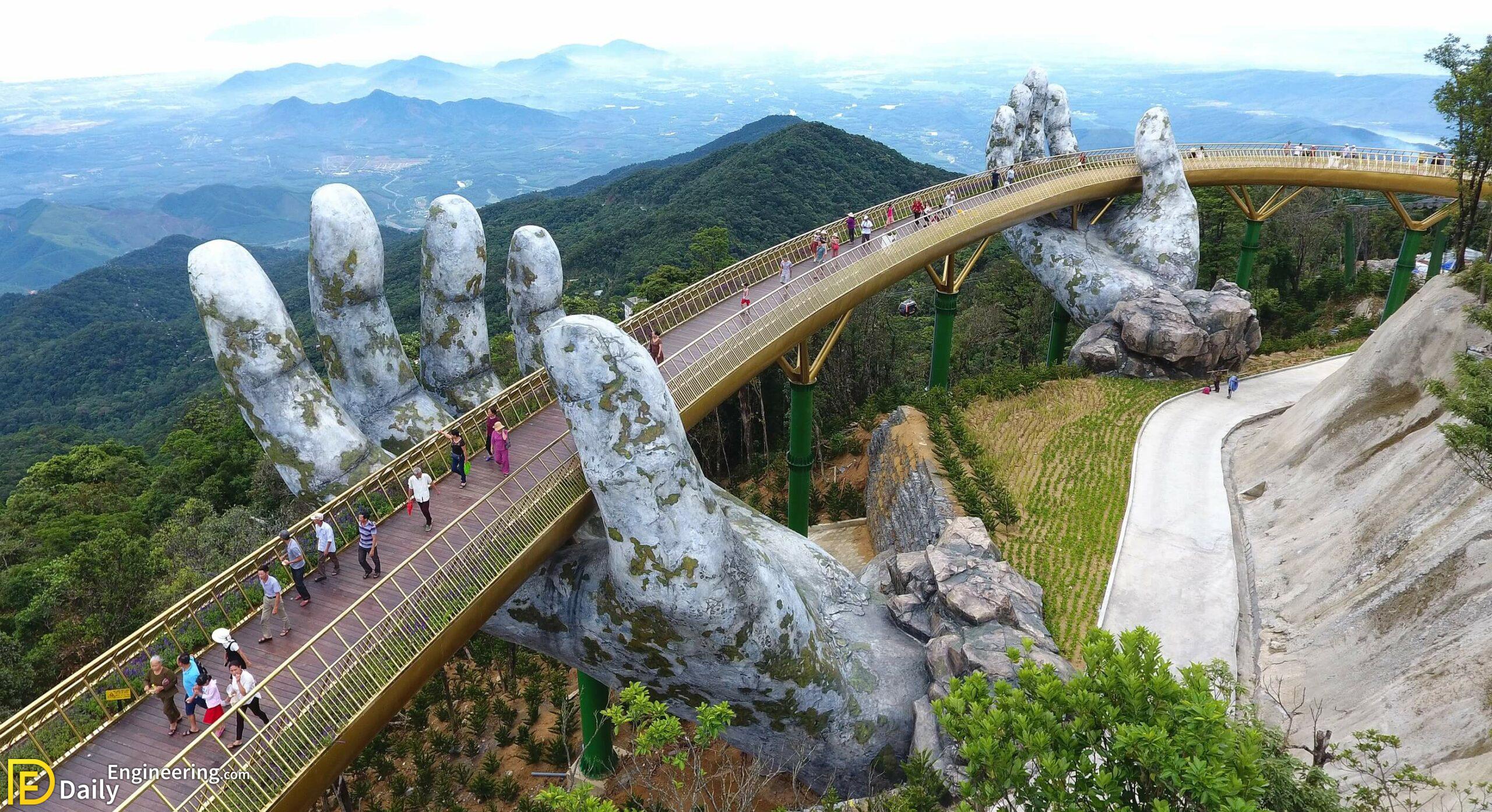 Over and above its function as a crossing, the overpass serves as a visual landmark and a place to contemplate the landscape since pedestrians make their way through a mountainside. The path is lined with purple Salvia farinacea for a glamorous appearance that complements the iconography of existing spatial elements. The horizontal alignment of the Golden Bridge defines a sense of lightness and elegance as our aim was to provide a graceful curve above that also blends with the landscape. As such, special attention had to be made to the landscape treatment.

The bridge establishes a relationship with the delicate surroundings by absorbing its contextual palette of colors and materials. The selected golden stainless steel handrails, the timber deck, and the green bridge columns in the form of trees, altogether, give rise to color contrast. Furthermore, all the colors and materials used for the two hands were carefully selected to create a lifelike appearance of an aged ruin from the ground. The two giant hands were deliberately embellished with cracks and moss finishing. In the long run, the Golden Bridge functions as a highlight feature for Ba Na Hills Resort. Its symbolic image is believed to serve as a great tourist attraction in Da Nang city and the whole country.