In this stair, all the steps are arranged continuously along in one direction. One flight may be split into one or more than one flight by interposing a landing. This stair can be used where narrow and long space is available for a staircase such as entrance, porch, etc.

It is a very common and popular type of stairs and is used in public as well as residential buildings. It consists of two flights running in opposite directions, separated by a half-space landing or a quarter space landing and a set of winders. The dog-legged stair is so-called because the bent of the stairs is similar to the dog’s leg. When the space available is equal to twice the width of the stairs, the dog-legged stair is used.

This type of stair consists of two or more flights arranging a well or opening between the backward and forward flights. When all the steps are difficult to arrange in two flights, a short third flight of 3 to 6 steps may be provided along the direction perpendicular to the hall. Open newel stair is mostly adopted in the lift.

The geometrical stairs are generally used in high-class residential buildings.  The stair is in the form of some curve, having all the steps as winders, radiating from the center of curvature of the curve. The handrail of a geometrical stair continues without interruption and without any angular turn-Considerable skill is required for fie designing and construction of a geometrical stair.  The minimum width of this stair has been, fixed at 1.75 m.

In this type of stair, all the steps radiate from a newel or well hole, in the form of winders. The circular stair is adopted at the backside of a building to access its various floors. 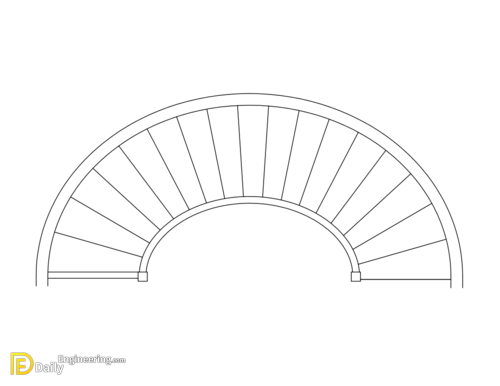 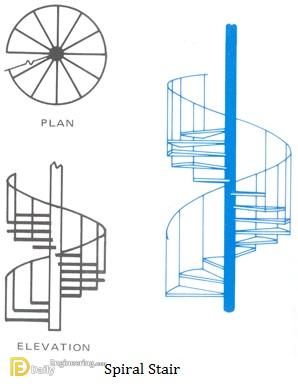 In this type of stair, the two flights run at right angles to each other and are separated by a quarter space larding. the stairs are generally provided when wall support is on one side only, or when in a huge apartment such as an entrance hall, stairs are to be provided. 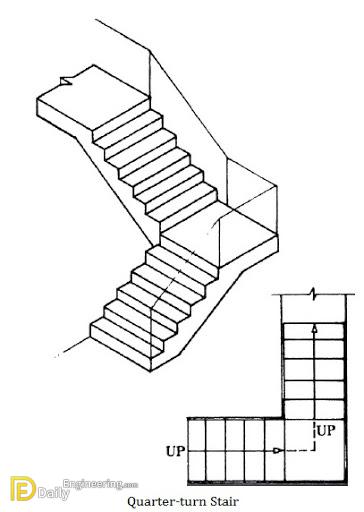 These stairs are commonly used in public buildings. In this type of stairs, the bottom flight is wider and is bifurcated into two narrower flights at the landing. The bifurcated stairs may be of two types, viz. Quarter turn and half turn. In the quarter-turn type, the upper the lower flights run at a right angle whereas, in the half-turn bifurcated stairs, the sets of flights go in opposite directions as in a quarter-turn stair and dog-legged stair respectively.