The humble tape measure is the world’s most commonly used measuring tool, accompanying millions of tradesmen and contractors to work every single day. Whilst the seasoned professionals amongst you will no doubt be fully aware of how to read the various markings on your tape, there will be amateurs, enthusiasts, or those just starting off in their careers who aren’t yet so knowledgeable. 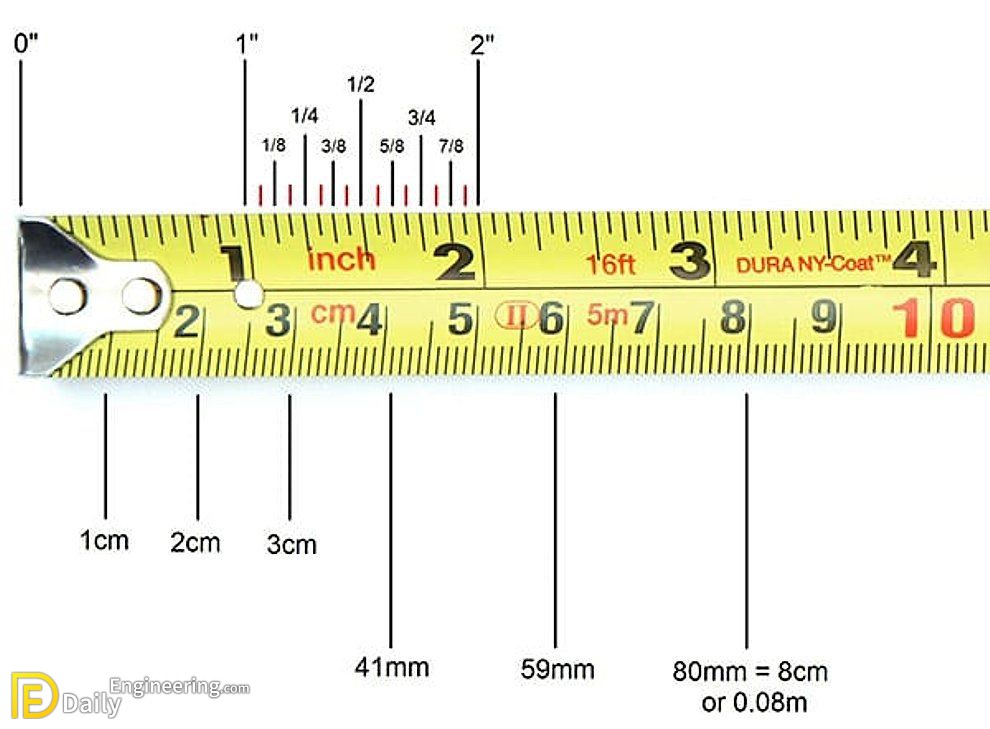 How to Read a Metric Tape Measure

Above you’ll see a picture of a metric/imperial pocket tape measure. The measurements towards the bottom of the image are metric. In other words, they’re in centimeters and millimeters. There are 10mm in each centimeter (shown by the ten spaces between each cm) and 100cm in each meter. Whilst the centimeters are clearly numbered, to make the blade easier to read the millimeters are not numbered. Also, whilst a few tapes show ‘1m’ to display the 1-meter mark, the majority will show ‘100cm’.

When looking at the image above, the 1st small mark after the 4cm point denotes a measurement of 41mm. The next small mark in line would be 42mm, the next would be 43mm, and so on. 41mm can also be referred to as 4.1cm (0.041m) but the majority of trades in the UK do tend to quote measurements in millimeters.

How to Read an Imperial Tape Measure

Whilst Britain now officially operates a metric system of measurement, our nation still sees a curious mix of both metric and imperial measurements being used on a day-to-day basis. We measure our height in feet and inches, our weight in stones and pounds, and our speed in miles per hour. Despite this, almost all 21st Century technical, engineering or construction measurements are quoted in millimeters. Most manufacturers have, therefore, opted to produce UK-spec tape measures with both metric and imperial graduations.

When referring to the diagram above you’ll see a series of large numbers marked 1, 2, 3, and 4. These numbers sit next to long vertical marks which represent whole inches. Put simply 1 = 1″,  2 = 2″ and so on. Between those numbers are a series of shorter marks that represent fractions of an inch. The mark directly in the middle of the inch denotes a measurement of 1/2″ whilst the markings on either side of it represent measurements of 1/4″ and 3/4″ respectively. Even smaller marks then denote 1/8ths and 1/16ths (marked in red) of an inch.

A 16ft tape measure, for example, will have sixteen one-foot marks along its length and 192 one-inch marks (12 inches per foot). Each inch will then have eight 1/8th of an inch and sixteen 1/16th of an inch mark.

Click Here To See Measure Everything Only With Your Hands